I’m interrupting my normal Monday Motivation to touch on a topic that I’ve been waiting to write about and after watching yesterday’s “Who is Black in America?” special, I have more than enough reasons to speak on the topic. 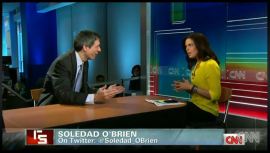 of their skin tone; many refer to the notion as the “house slave vs. field slave” mentality.

The show highlighted several individuals who did and did not identify with being black, even though they had some direct descent of African or African-American blood. I watched as a school teacher shocked students with the brown paper bag test that was once used to separate darker skinned from lighter skinned African-Americans around the US; creating internal separatism between skin tones. Students learned what the “one drop” rule meant; denoting that if you had any African ancestors within five generations you were legally defined as Black. I watched light-skinned and black skin men and women share their thoughts on what “being black” meant. I was touched with how some light-skinned girls were dealing with having to answer society’s question of “What are you?” Wow…what are you? Not how are you? Who are you? But what are you? This entire news report connected directly with my life on several different levels and how I have grown to accept with the question “What are you?” 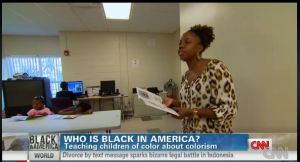 So in response to the show, I wanted to share my own Colorism story to not only continue this conversation amongst my race but also to share OUR story as it is a part of America’s history.

At an early age, I understood that I was black since both my parents were black. It was that simple but very soon I learned that I wasn’t just black.

My first experience with knowing the boundaries of my blackness came in elementary school. My first boyfriend was white but as soon as he found out that I was black that relationship came to a quick end. I remember the conversation like it was yesterday. We argued the entire recess about me being black. He told me that I couldn’t be black because of my skin. I told him that my mom and dad were both black so I had to be black. He went on telling me over and over that my skin said otherwise but soon he realized that it was true. I had to be black. Immediately he broke up with me. Sure I can laugh about it today, but at that time I was confused but promised myself to never go through that situation again.

From then on my race and skin tone played a major part in who I identified with. I made sure to hang with the darker skinned girls. Never again will I get misread as white. My head will filled with descriptors like “high-yellow”, “redbone”, “white girl”, “fair-skinned”,  “vanilla” and so on, all from the people who I identified with but that only made me fight harder to show that I was black. The older I got, the darker my friends got. By middle school, I was pushing away other light-skinned girls, ensuring that I don’t get grouped in the “light-skinned/long hair/stuck-up” group. My group of friends included all dark-skinned females. I was dying to relate. It was like I was in a gang, doing whatever I could to show that I belonged and was down for the “black” cause. But no matter what I did they eventually all turned on me. Since my family bought me name brand clothes and I got my hair done every two weeks, I was labeled as trying to be better than them; the quintessential stuck-up, light-skinned girl better know as the “house slave”. I then became one of their light-skinned targets. Every day I had to be walked home by my boyfriend and his friends as my former dark-skinned best friends threatened to jump me everyday after school. I couldn’t understand it. I then tried to connect with the other light skinned targets but that was pointless. I didn’t trust any other girls who weren’t in my family. I attempted to try to reconnect with the dark-skinned girls by fighting with my mom about not buying me those clothes. It was then that my mom told me about Colorism.

My mom, a fair-skinned, freckled-face woman with sandy brown hair was easily mistaken as a white woman until she decided to completely cut off her long curls to a low fade. She explained to me the concept of the “house slave vs. field slave” and how some darker skinned women/girls truly believe that we, light-skinned women/girls, thought so much highly of ourselves because of our skin tone. Around that time, Alex Haley created a television movie called “Queen”, based off his novel Queen: The Story of an American Family, which starred the bi-racial actress Halle Berry and a wonderful cast of African American and Caucasian actors. My mom sat me down and we watched the movie together. I learned of one bi-racial woman’s plight of being born into slavery, thinking that she was white, as she was allowed to stay in her father’s plantation house as a house slave, but who soon was raped by white men once they realized her true race, shunned by dark-skinned black women and who eventually had to begged to be accepted by her own race. My mind was blown. How could such a story in a time like slavery still resemble thoughts and actions in our culture today?

Soon after learning of my situation at school, my mom moved us to a different city with a different school and a new start for my psyche. In less than 14 years, I understood that the tone of my skin, the texture of my hair and the shape of my eyes would always give people a reason to judge me. But I had to stand up for myself and understand that no matter what other blacks, or any race for that matter, thought of me I must remember who I was on the inside. When I completed the last 4 months of middles school at my new school, I had friends of all races, shapes and religions. I grew to appreciate our differences and rather than condemning myself from interacting with those differences I embraced our various tones to learn more about each person. Colorism towards me has never ended however, I have learned not to let it consume my thoughts. I’ve accepted my differences.  I feel blessed that I have overcome Colorism early on in life, within myself, but there are so many who still struggle with this Colorism war, especially in today’s generation.

As I’ve gotten older, I’ve realized the answer to my question of how this notion is still alive in our culture. And the answer is really simple; because we, as a culture, perpetuate this thought process. Both knowingly and unknowingly we pass on these thoughts to our kids, family and friends. We are our only solution. Some darker skin blacks think that their skin is ugly or a hindrance to their success. Some still feel that we, light-skinned blacks, don’t have to go through half the things that darker skinned blacks have to go through. What a thought. A crazy thought but still a thought.

Some say we don’t get racially profiled liked other dark-skinned blacks. BS! Sure I do! Let my nails, clothes, or hair be a particular color or style and I will undoubtedly be categorized as ghetto, hood, loud, rude, etc., etc. Not by other blacks but by other a races. My race, on the other hand, would look at me as I’m trying to find fit in; trying to be black. Did you catch that…I get racially profiled by everyone! Damned if I do, Damned if I don’t.

In my eyes there is only one possible solution to Colorism. We as a melting race, must recognize and appreciate our different shades. Being different is beautiful. It tells others about our rich and long history. I enjoy that my race has so many naturally made shades. Our features cannot be duplicated even though many other races around the world go through costly and sometimes dangerous regimes to look like our shades. So we should definitely take our differences as unique and beautiful.

So let me go back to the question that I get asked so much…What am I?

I am a woman, a mother, a wife, a daughter, a sister, a niece,  an aunt, a cousin, a friend, a graduate, a person…I am exactly what I’m supposed to be. Black and very, very proud to be me.