So I wanted to do a different post today; something that was focused on winning the war and not the battle. Or something positive and inspirational for all my fathers, brothers, sons and nephews back home. But I woke up this morning with a different feeling, a feeling of anger, stress, frustration, anxiety, worry and exhaustion. The verdict is in as we can all see as they prepare the city for the anticipated violence and destruction; violence and destruction that wouldn’t happen if justic

Gun sales are up. The city is calm as if a monstrous storm was heading its way. My Auntie told me that she felt in her spirit that things weren’t going to be right weeks ago. And now, more than likely, by the end of the weekend we will know that it’s okay to take another young black man’s life. So what am I supposed to tell any black man or boy in my life? Don’t be mad? The law will protect you? It’s OK? But it’s not OK!

I have witnessed my husband getting pulled over because he was in a nice vehicle by two white police officers. I’ve heard many stories of constant harassment of black men in their own neighborhoods, as if they didn’t deserve to live there. I’ve watched young black men and women get harassed by police officers as a white crowd fights nearby on the street.

So why don’t they deserve to feel safe? Why do they deserve to keep getting murdered by the masses, whether it is by our own community or the law? I struggle not to tell fathers, brothers, nephews and sons to watch their back. Stay protected at all times because the US struggles to find worth in each breath you take?

“Rioting is the language of the unheard.” – Dr. Martin Luther King Jr.

I want to tell them it’s ok to be mad and scared because you should be. But to take those emotions and make them drive you to a new level, greater than your oppressors. But what this “new level” looks like, I have no clue. All I know is that our leaders like Dr. King and Malcolm X pushed us to advance ourselves and be greater than our evils. Hell we finally got a black man into the White House so we’ve come a long way…right? I’ll be honest with you, I’ve been very supportive of the President remaining fair yet unapologetic for his stance on certain issues like the Trayvon Martin case or his political stance on LGBT rights but I feel like this is a time for him to get furious and state what he has held back for a long time. He has dealt with undeniable racism from other political parties and public news outlets which has siphon down to our young men.

So as you can see I’m at a dead end. The optimistic, inspirational side of me is searching high and low for a resolution but the realistic, pessimistic side of me wants to push every black man and boy I know to not be scared to fight back at any cost. You are worthy. You deserve a chance and you need to make sure that you are given that chance.

Please share your thoughts because it hurts my heart to not have anything more “positive” to state but I feel like our harsh reality has come to a peak and we are running out of “positive” answers. #prayers #ferguson #nojusticenopeace 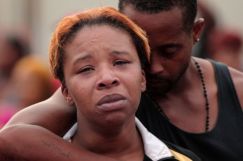